The Delhi high court on Thursday sought response of the Centre and the Election Commission on a plea seeking to ensure that masks are worn mandatorily by everyone involved in poll campaigns during the ongoing elections in various states and union territories. 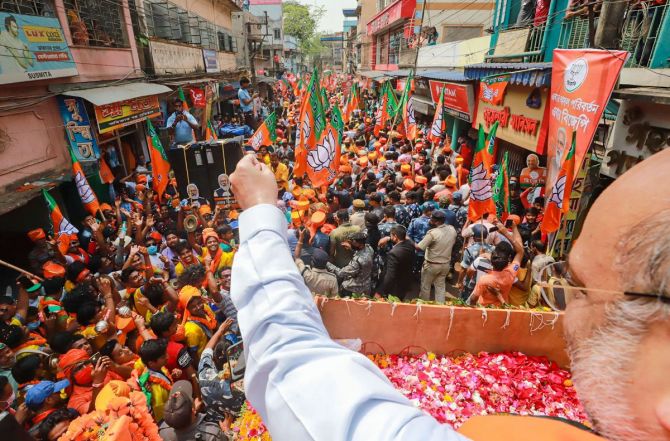 A bench of Chief Justice D N Patel and Justice Jasmeet Singh issued notice to the Centre and the EC and sought their response to the application by Vikram Singh, the former director general of police of Uttar Pradesh and also the chairman of think tank Centre for Accountability and Systemic Change (CASC).

The court listed the application for further hearing on April 30 along with Singh's main petition seeking to debar campaigners and candidates from campaigning in the assembly elections for repeatedly violating the mandatory guidelines issued by the poll panel in view of the COVID-19 pandemic.

Advocate Virag Gupta, appearing for Singh, told the bench that the poll body should 'create awareness through digital, print and electronic media for compulsory masking and social distancing during assembly elections'.

"When all the authorities are unanimous on mandatory masking, it defies logic as to why the rule should not be enforced in election campaigns," Gupta argued.

Singh, in his application filed through advocate Gaurav Pathak, has sought a direction to the Centre to ensure strict compliance of its March 23 order, mandating imposition of appropriate fines, on persons not wearing face masks in public and workplaces, in states and UTs where elections are being held.

The assembly elections in Assam, Kerala, Tamil Nadu, West Bengal and Puducherry are being held in various phases.

The polls started on March 27 and will conclude on April 29.

Singh has contended that despite the orders and guidelines of the Centre and EC, 'election campaigning is going on in full swing, without any regard to the COVID-19 regulations'.

He has claimed that there is an 'indirect discrimination' against the general public as fines are collected from them for violating COVID-19 norms, but no action is taken against politicians.

'None of the politicians mask'

'Why did the government delay the vaccine?'

COVID-19: A MUST READ Interview